Tom Dash (born 1975) has always had a passion for art and his work reflects contemporary themes working with pop iconography, mainly in post production painting, photography, sculpture, murals and installation.  He developed his skills in contemporary art and was influenced by the many years he spent as a lead assistant and fabricator for Richard Prince (2005 until 2011). In 2005 Thomas D. Studio Inc. was formed to offer artists services and fabrication using a wide array of materials and methods such as acrylic, enamel, encaustic, silkscreen, wheat paste, bronze and wood. Tom has historically been involved in the art community, both in promoting his own work and collaborating with others. From 1998 on, Tom has had numerous solo and group shows, being represented by other galleries as well as one he created, the Dos Mil Gallery, in Portland Oregon. He was affiliated with Portland Institute for Contemporary Art which also produced group shows. In 2003 he was invited to be part of a group show at the Art Center in Pasadena, California. After living in Portland Oregon for many years, Tom returned to the east end of Long Island, New York in 2004 and has maintained his residence on the east end ever since. While in high school, Tom was accepted to a summer art programs at the Rhode Island School of Design and subsequently took classes at the Museum School for Fine Arts, Boston. With significant life experience added to his formal training, he uses a variety of techniques to comment on societal issues, music and popular cultural themes. 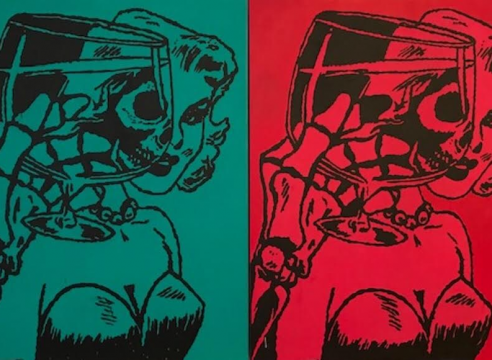